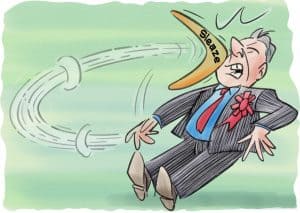 Welcome back to my weekly – and sometimes irreverent – look at the world of politics. I call it ‘Just a Minute’ because it only takes SIXTY SECONDS to read it.

Last week’s elections proved one important point. The ordinary people of the country don’t give two hoots about the prime minister’s wallpaper, how many children he has fathered or why he can’t afford a comb.

A poll by YouGov found that only one in three were following the story which has gripped the political nerds in the Whitehall bubble, whose only meaningful foray outside of London was to go Oxford or Cambridge.

What the people care about is the ability to lead them out a crisis. Boris, after a poor start put everything on the vaccine and it worked. Job done.

Sleaze is like mud. It doesn’t just stick – it splatters and spreads. And it also sticks to the hand of the person who threw it in the first place.

And the more Sir Keir bangs on about sleaze, the more we begin to think we think that it not just the Tories, it’s all politicians. Except the Greens who use it in their allotments for organic carrots.

Labour has its own problems. The police are busy investigating Labour-run Liverpool and some of its politicians and their friends over building contracts.

Unite, the trade union, the Labour Party’s biggest funder to the tune of some £10 million has a massive scandal over cost overrun for its new conference and training centre. Initially budgeted at £7 million, it is now costing close to £100 million. Oooops.

As well as Covid, Boris knows what turns the electorate on: housing. Not the crisis in the big cities, but the stuff that attracts Help to Buy funding.

Up to June 2017, when statistics stopped being compiled, almost half of all Help to Buy recipients were in five areas: North (East and West) Yorkshire & Humber, East and West Midlands.  And the mean property price was under £150,000 (no typo, Londoners).

So forget about sleaze Sir Keir. There are no votes there. Try housing, education, health, anything we can relate to.

And get yourself a good campaign manager. I hear a guy called Cummings is looking for a job but is having trouble reading small ads.