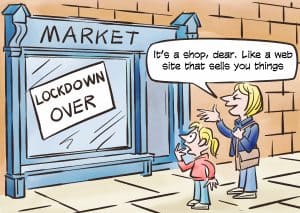 Now just because I’m Irish, there is no need for comments about my infamous drinking.

Look at the map. You will see that for the vast majority of people in the UK, housing is not their primary concern. 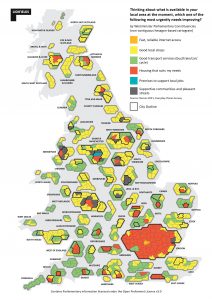 It’s only in London and parts of the big cities where this is the major issue. All that yellow is what people really want: good local shops. The green is good transport, orange is internet access and the red is ‘housing that suits my needs’.

This excellent map produced by Lichfields comes from a Demos www.demos.co.uk report titled Everyday Places. The problem, of course, is that people say one thing and do another. When Demos did a bit more digging, they found that supermarkets are the most favoured type of shopping outlet, with around half of the population (48%) picking them as their top priority, followed by local independent shops (28%). Mmmmmmmm.

And the pandemic is also playing its part in solving the ‘housing crisis’. Suddenly people are moving out of the big cities. In London, prices are stagnant while in other parts of the UK, they are up 10 per cent year on year.

Another reason is probably the stamp duty holiday which applies to properties under £500,000. That will get you a small broom cupboard in parts of London.

Most of the country has solved the housing crisis ages ago. And help to buy, or ‘help to vote conservative’ as cynics might call it is pushing housing way down the list.

Look at the map again and you’ll see why the ‘red wall’ of former Labour seats has collapsed. The electorate are increasingly home owners and likely to vote Tory.

So with all that good news out of the way, I think I’ll mosey on down to the pub and have a socially distanced pint or seven.

Have a great week.