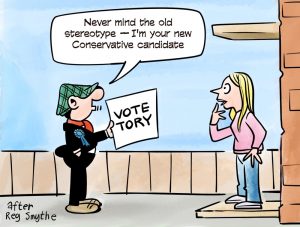 We love to label people by class. It helps us put them in boxes. The best effort was by John Cleese and The Two Ronnies and you can see it here.

But who and where are these classes?

The stereotypical image of a working class person is a white man, who lives in a terraced council house somewhere in the ‘north’, wears a flat cap, breeds ferrets, walks whippets and is happiest with a pint of mild after the footie.

There is a misconception that the working classes will all vote Labour the rest will vote Conservative or, in a moment of desperation, Lib Dem, UKIP or Monster Raving Looney. (Is there a difference?)

This is an extremely dangerous assumption. So anyone – and here I mean Labour Party – chasing this vote there is chasing a mirage of a time long gone.

It’s the sons and daughters of the Blue-Collar worker – another awful term for us oiks – that are now the kingmakers in the politics of 2020s.

The think tank Demos www.demos.org defined ‘working class’ as people without a degree. So that includes Bill Gates (dropped out of Harvard), Sir Richard Branson (left school at 16) and Jeremy Corbyn (dropped out at year one after arguing with this tutors…no surprise there). Oiks all.

One hundred years ago as Labour was coming to prominence there were 4,300 graduates each year in the UK. Now the ‘universities’ (you know what the quote marks mean) are churning out 400,000 every year. Almost 40% of the UK population between the ages of 16 and 64 has a degree.

These are the new ‘working classes’ and they live not just in London…they’re all over the place. And this oik is proud to be one of them.

Have a great weekend