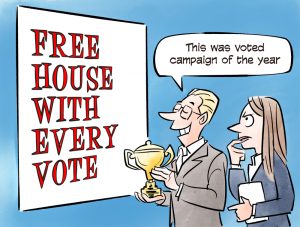 In her first speech as leader to the Conservative Party Conference in 1975, Mrs Thatcher pledged a property-owning democracy.

She wasn’t the first, the concept had been around since the 1920s.  The Tory Prime Minister Stanley Baldwin, whose family were major industrialists, was all in favour of giving the workers a slice of the action.

Another Tory PM, Neville Chamberlain essentially invented the council house just before the Second World War to try to clear the slums.

Although Mrs T was a free marketeer, one of her first major policy decisions was to launch ‘Right to Buy’, a major intervention in the market allowing Council tenants to buy their home generally at very favourable terms.

Today, there are few who do not believe that removing all this housing stock from the public sector was a terrible mistake. But it is done now and cannot be undone, so let’s move on.

The next step was the equity loan scheme ‘Help to Buy’ another Conservative initiative. So far, more than 300,000 loans have been granted and are running at 50,000 a year. That’s a lot of votes.

The scheme is heavily weighted towards low-cost housing, so it is no surprise that its biggest uptake has been outside the large urban areas. The North of England and the Midlands have been big beneficiaries.

And of course, we have Stamp Duty holidays…

The latest is First Homes which offers discounts of up to 50% to help people to buy in their own locality. It is capped at £250,000 and you will not get much cat-swinging space for that in London.

Rightmove tells us that for £200,000 you could get a one-bedroom first-floor maisonette in New Eltham, South London. Cat optional.

Or you could head to Scotland where the same money will buy you a three-bedroom detached ‘upside down’ (bedrooms on the ground floor) house overlooking a loch.

Of course, the cynical (me for example) will say that all these initiatives are designed to win votes. Of course, they are. The Red Wall, now the Blue Wall, of Conservative seats in the Midlands and has been built with the bricks of Right to buy, Help to Buy and now First Homes.

So where will all this end? If we get any more initiatives the Government will soon be paying me to take a house from them under a new scheme with the pithy name of ‘Why Buy?’