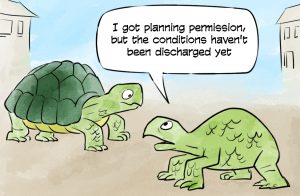 The Council chamber is empty. The Nimby’s have packed up their placards and gone home. The officers heave a sigh of relief that their recommendation has been approved. The developer and the army of consultants are celebrating in the curry house.

Two years later and there’s not a spade in the ground.

Councils are measured on the number of planning applications they approve with defined time limits. For example, the time limit is usually 13 weeks for major developments.

Now Chief Planners are clever chaps and chapesses (can I say that anymore?) and if you set them a test, they will make sure that they pass…with flying colours.

The problem is discharging conditions, agreeing the CIL or the section 106. Naturally this involves lawyers…say no more. (By the way, the reason that our legal friends are so slow is that they are paid by the hour.) The Local Government Association (LGA), which represents councils, argues that more than 1 million homes with planning permission are being ‘land banked’ by the industry.

The industry, backed by two authoritative reports, by Lord Letwin and Kate Barker, found no evidence of land banking. And they commissioned Litchfield to show that the LGA had the wrong end of the stick.

Buried amongst 30 pages of fairly heavy going, one sentence jumped from the excellent Litchfield’s report jumped out at me. There is an absence of good data on the build out of permissions. (My emphasis).

So, if you can’t measure it, you can’t manage it. And if you’re measuring the wrong parameter, you are going to get the wrong result. Is there a solution?

At the moment, developers have three years to implement a planning permission by having some sort of meaningful development on the site – like groundworks or a new road.

Councils should also be measured by the number of fully implemented planning permissions. This should be time limited to, say six months, or a maximum of one year.

For the councils which fail this test, it might be a reduction in the developers’ contribution. On the other hand, the developers would have to pay more if they were holding things up.

In the case of a dispute it can go to arbitration, with the loser picking up the bill.

Would it work? Anything is better than what we have at moment. Answers on a postcard please.

Have a great week