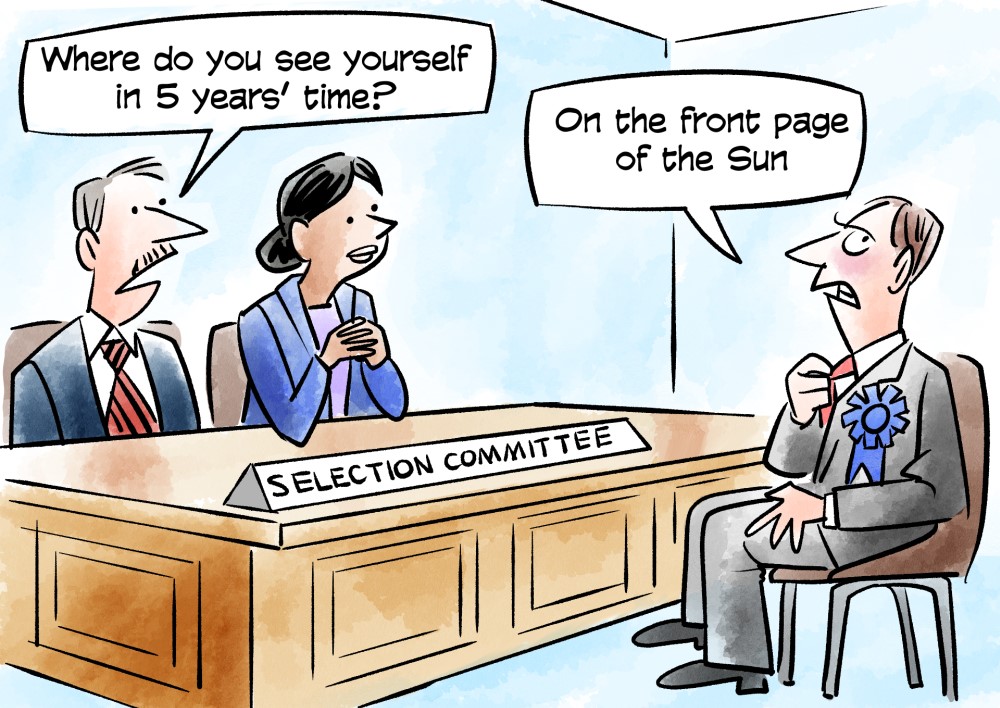 Over the past, a-hem, let’s say many, years, I have hired politicians of all colours. There was the mad, the bad, the sad, chisellers, liars, fantasists, losers, winners, crooks (you know who you are)… I won’t go on.

But do you have the right qualities to be a politician? Look at this check list and rate yourself.

Ego. This is absolutely essential. You must have total self-belief. Nobody ever forced anyone to put themselves forward for election.

Altruism. Despite my cynicism, I have found that most politicians have a sense of wanting to do good for their communities. And, of course, they believe they are the best person to do it.

Education. And here I’m not talking about your A-levels. No, it’s about the right school. For Tories, Eton followed by Oxford are essential. Over the centuries, half of Britain’s PMs went to Oxford, and many would say that’s enough. Isn’t that right Sir Kier (University of Leeds)?

Money. That little Trust Fund that your Great Grandad set up in Victorian times will come in nicely. (Who mentioned slavery?) You’ll be paid a pittance as you work your way up the greasy pole of politics. So, a little London flat and an allowance will be most helpful.

Scandals. There are only two types: sex and money. The trick is not to get caught. So put absolutely nothing in writing to anyone. The world is now like the novel 1984 – Big Google is watching you.

Hide. As in rhinoceros. You will need a tough skin to tough it out when you are caught being naughty. You will need a “neck like a jockey’s b******” as we say in Ireland. One time you might have had to resign, but don’t worry if you’re caught by one of those stupid security cameras, you’ll be back in no time. Bets, anyone?

Sex. You were waiting for this, weren’t you? As Henry Kissinger said: “power is the ultimate aphrodisiac” and there is no shortage of opportunities for people of all sexes and persuasions. So, a strong sex drive is essential so you can grope your way to the top. Examples are too numerous to mention.

If you’ve answered ‘yes’ to the above questions, you are wasted where you are. ‘Big Ben’ awaits you.