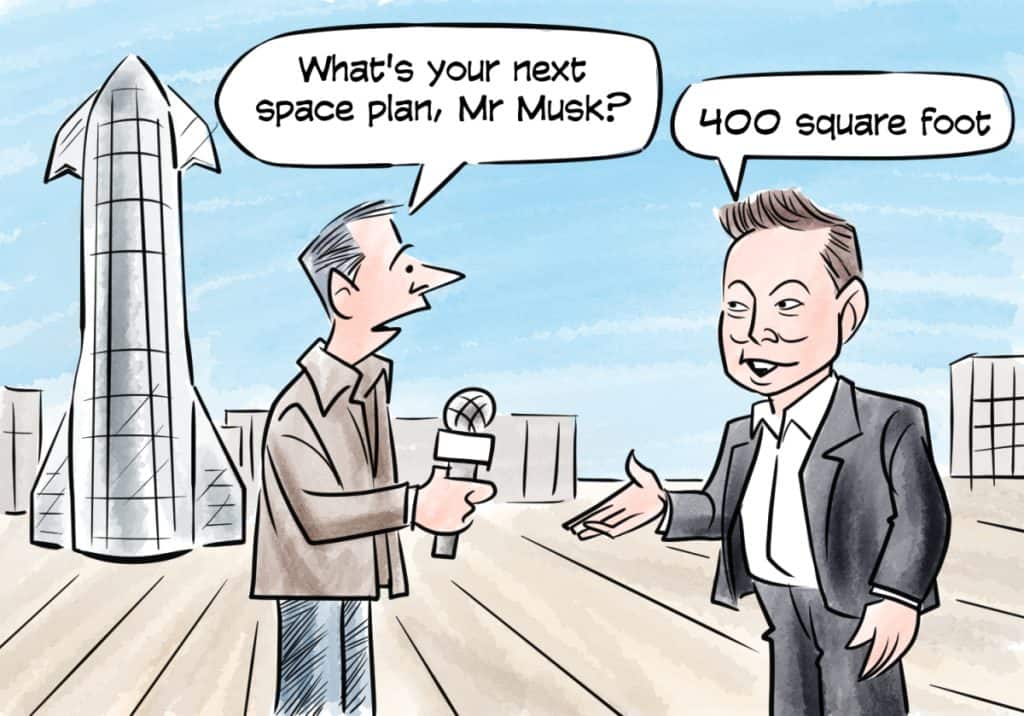 When young people (almost everyone I know) moan that their new home hasn’t got room to swing a cat, I tell them to shut the f*** up or I’ll report them to the RSPCA.

Then, I point to one of the 21st century’s greatest entrepreneurs, Elon Musk, who has now moved into a tiny modular home in Texas on the site of one of his factories.

And like the Old Woman who lived in a shoe (‘she had so many children she didn’t know what to do’), the Founder of Tesla and Space X has a large family – seven of them (where does he get the time?). The latest is named ‘X Æ A-12’. Poor little devil. Imagine the playground teasing.

But, as if to emulate the Old Woman, Mr Musk is downsizing.

Last week, I pointed out that the average new home size in England is 729 sq ft – the equivalent area of 1,000 shoes boxes. But Mr Musk has gone one further and is now living in half-a-shoebox of less than 400 sq ft.

As they say in Hello magazine, Mr Musk invited us into his home and you can you get an inside view here (children not included). https://www.designboom.com/architecture/elon-musk-prefab-rented-house-boxabl-casita-07-05-2021/

In case you’re thinking of calling the NSPCC, Mr Musk is keeping one of his mansions for the kids. He has sold the other six.

He said: “I will have almost no property of great value other than company shares. I only need a house for my children, and I can still rent one.”

Or he could take one of his Space X rockets and go Mars.

After all, he hopes to colonise it.