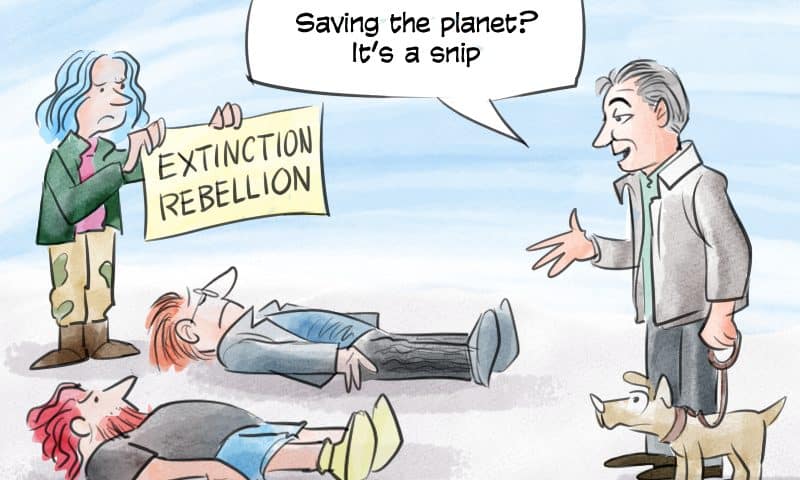 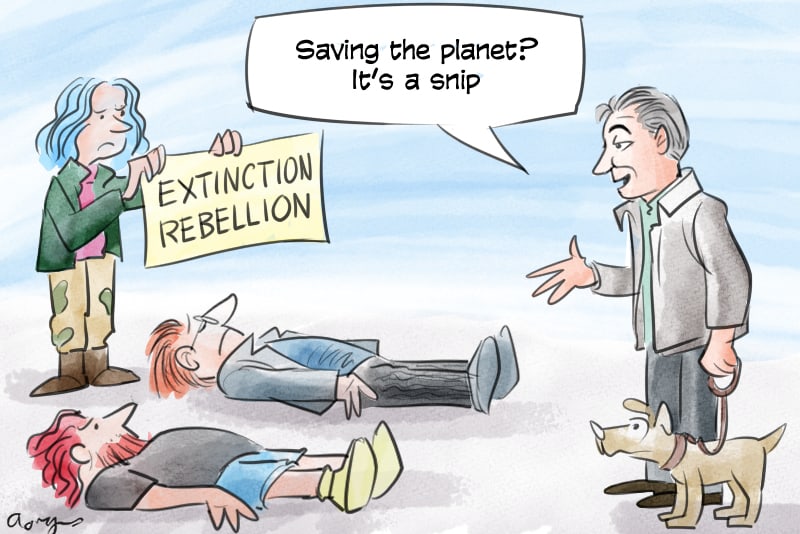 When the boys and girls from extinction rebellion were protesting in Oxford circus, (and blocking the traffic for a week) I decided to go down and see what all the fuss was about.

To be in the safe side – extinction is a tough word – I brought protection in the form of Beebee – my dog. (Pictured here.) don’t be fooled – she’s vicious when aroused.

I arrived just after the actress (or is it actor) Emma Thompson flew in from Hollywood – first class bien sure – to join the protest against carbon emissions. Beebee was confused by this but the assembled crowd through it was a great idea. I was confused too as a lot of CO2 was generated by airplanes especially those first class seats.

Anyway, I engaged in some intercourse with the assembled crowd – a lovely bunch of young people and asked them what they were trying to achieve. In short and I apologise if I have over-summarised this – but they are trying to save the planet. The big threat is carbon dioxide emissions which is leading to a rise in global temperatures.

In a spirit of inquisitiveness I asked what has caused this and they immediately responded that it was the activities of mankind, energy generations from coal, gas and oil and the like.

And of course, there was wind from ruminants such as sheep, cows and other mammals (that odour wasn’t me Madam).

So I said if we reduce the number of wind producers then we would have less CO2. They totally agreed with that.

So the obvious answer to have fewer humans producing less CO2 and eating less meat.

Simply put what we need is population control in the western world.

The conversation went rather quiet at this stage until I made a suggestion to the lads present: why don’t you all go up to the Marie Stopes Clinic and have a vasectomy. Then you won’t be able to produce any more CO2 producing creatures. I said I had it done and it had no effect on what we shall call ‘performance’. In fact it improved things as there was no fear of an unwanted pregnancy.

Then as the world’s population falls the planet will be saved.

So Beebee (who will not be snipped) and I asked for volunteers to head to Marie’s Stopes for a free snip.

There were no volunteers.