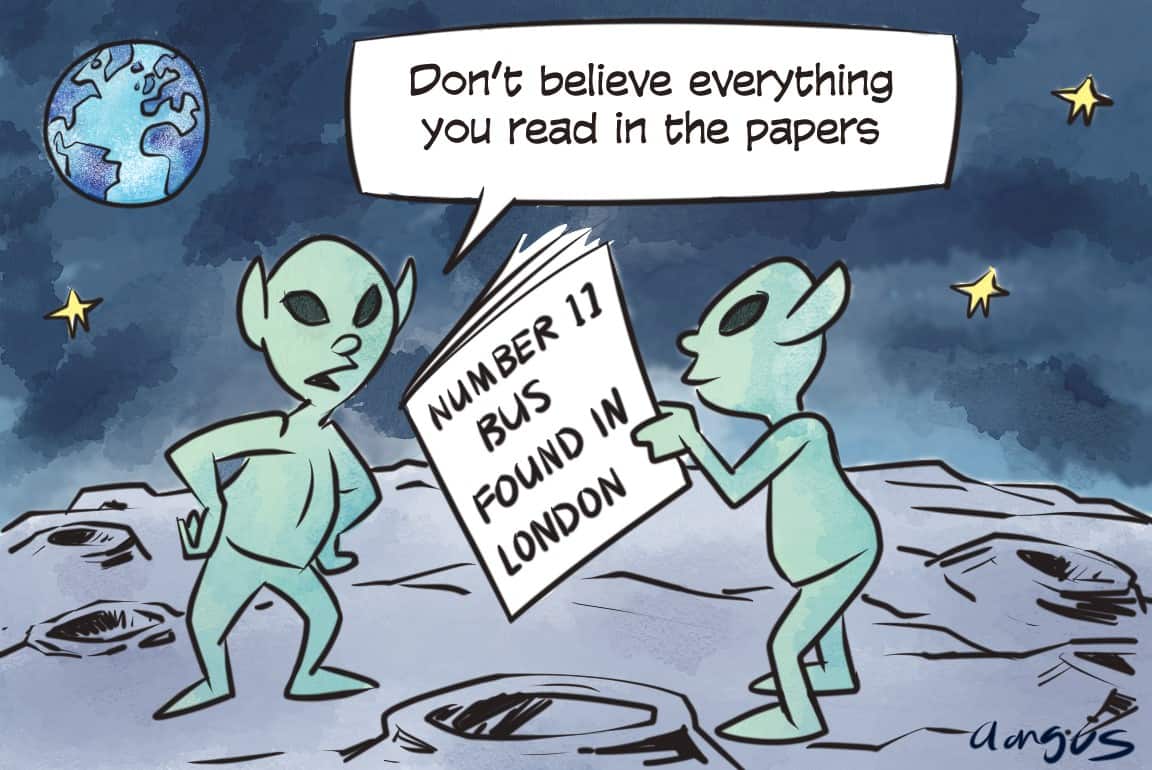 The relationship between politicians and the media is a bit like a what I call an ‘economic marriage’. Both sides can’t really stand the sight of each other, but the money situation makes it impossible to get divorced. If the family home is sold, then they will both have to live in hovels. And then there’s the kids…me and you.

The politicians know that the public take a sceptical view of the media. And deep down, we all have a very sceptical view of news. For instance, I do not believe that a London Bus was once found on the moon – which was the front page of the one of our more lurid tabloids.

Nor did I believe the headline a few weeks later that the bus had been stolen from the moon. Slow news week.

And we all know that newspapers are biased in favour of one Party of another. They don’t call it the Daily TORYgraph for nothing. If I read that fine organ, I will almost certainly be a Tory. Even though it is giving the government a fairly hard time at the moment. Dead right Madam.

And The Guardian leans, bends over backwards, some would say to the left.

And, we all loved the expenses scandal with one of our representatives buying a duck house at our expense. Without the media we would never have known chicanery about expenses.

So, despite all its faults the media provides a vital function as a watchdog on out politicians. Only the other week, one MP got a suspended sentence and another resigned for lobbying. The media can be very tough on the politicians, but these guys have fairly thick skins.

But what we do expect from our politicians is probity and decency (stop laughing at the back). After all they are the law makers and if they don’t give two hoots about the law when why should the rest of us.

And there are many decent, honest and hard-working MPs and we should applaud them. It’s a lousy job with incredible hours and abuse from all quarters

We have a free and unfettered media in this country and that is as it should be. And if I want to believe that the number 11 bus has a route around the craters of the moon, well that’s my right!

But, the bus is small beer compared to some of the rubbish on the Internet about Covid vaccination. Sometimes I just feel like reading The Beano.