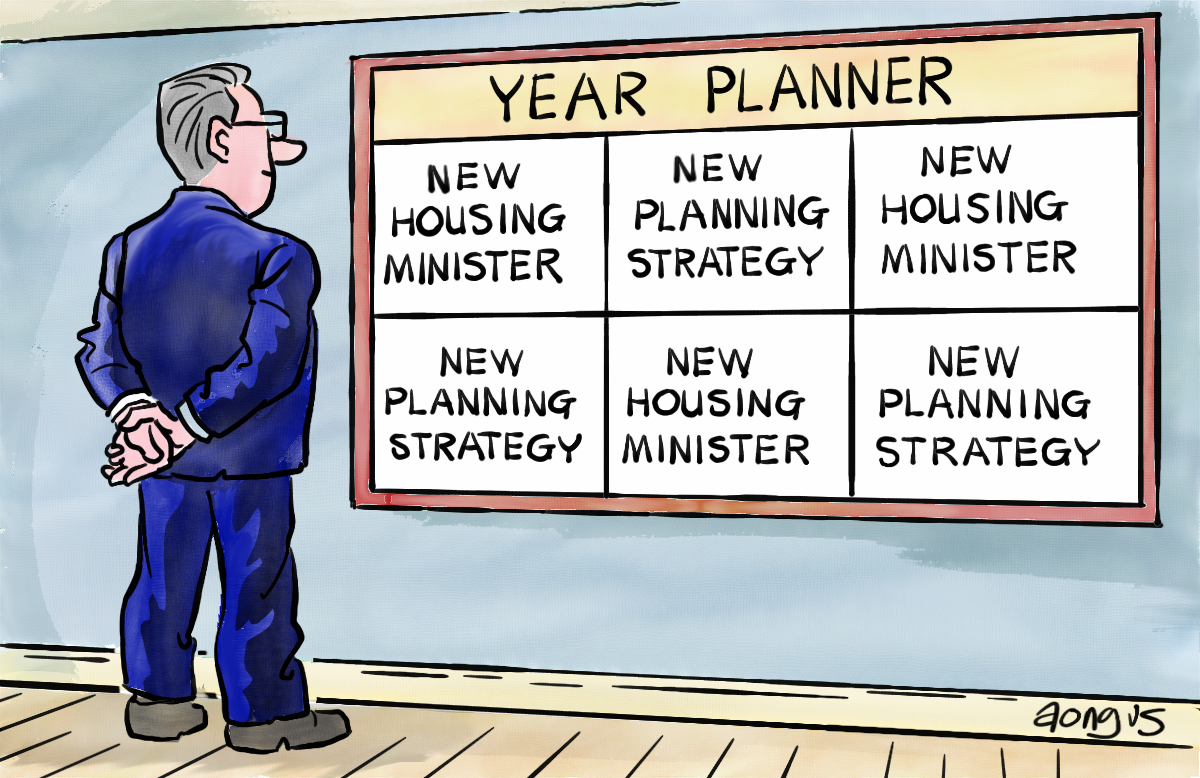 This week’s question: how many housing Ministers have there been since 1990? (Have a guess and let me know, I’ll tell you the answer next week)

We trained hard, but it seemed that every time we were beginning to form up into teams, we would be reorganized. I was to learn later in life that we tend to meet any new situation by reorganizing; and a wonderful method it can be for creating the illusion of progress while producing confusion, inefficiency, and demoralization.

This quote is attributed to Petronius Arbiter, a Roman official at the time of Nero (37AD – 68AD), the fella who fiddled while Rome burnt 2,000 years ago.

Having been involved in the planning system for some 30 years, I know how Petronius must have felt. Confusion, inefficiency, and demoralisation sums it up nicely.

Being a planner must be like being on a tiny raft in the middle of the Atlantic Ocean and you don’t know what storm is going to hit you next. The introduction and abolition of Regional Spatial Strategies, DPDs replacing LDFs (planning by acronym), The Localism Act, the NPPF and many more storms as you try to make you way to dry land of approval.

Lately we had the then Secretary of State’s plans for a Planning Bill promising the greatest shake-up of the system since the 1947: Robert Jenrick’s Planning Bill, which was announced to great fanfare in 2020 promising ‘beautiful’ homes. So, you get your lippy out and start preparing for this.

A little storm at the Chesham and Amersham by-election sends your little raft reeling and the Gods decided that this shake-up is not going to happen because the people it shook up most were Tory MPs in the South. The new planning bill is no more.

Rather Mr Gove – aka as the Leveller (look up the 17th century poem – Death the Leveller – by James Shirley) – will quietly wrap it around his Levelling Up White Paper etc bill and the colourful Mr Jenrick has gone the back benches.

And on your little raft, you have a captain, called the Housing Minister. The only problem is that the Gods keep on changing him or her about once a year, so by the time they’ve figured out where in the Atlantic the raft is, he or she is shunted off to another job.

The Government makes great play about meeting the target of building 300,000 homes a year yet it there does not seem to be a concrete plan as how to achieve that.

How about a few old-fashioned Key Performance Indicators (KPIs), not for planning authorities but for the Government so that it can be made transparently accountable.

Let’s get some measure in there, a bit like the Bank of England having to report to the Chancellor when the rate of inflation went above 2%. If only. But at least it’s a measure of success or failure.

This might steady your little raft and end the ‘confusion, inefficiency and demoralisation’ with constant reorganisations as Petronius Arbiter pointed out 2,000 years ago.