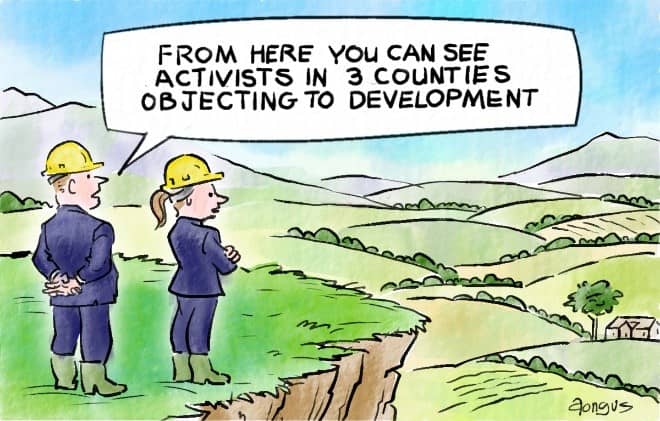 I thought the headline might appeal to you, but first a word from our sponsor.

Commercial Break. Yesterday there were local elections in many parts of the UK. You can get the headlines but what really happened to YOUR site? We can give you real insights (not just the usual stuff from the Web). Call us now on 020 4538 7200 or email morgan@theccp.net

Anyway, for many years (Henry, put in a nice low number here), I have been dealing with those who oppose development – who come under the general term – NIMBY. Like adding ‘-gate’ on the back of any scandal, the term is abused.

The origin of the term is hazy, but it’s been around since Nick Ridley (the Secretary of State for the Environment), who had responsibility for housing, used it to try to stop development in his Own Backyard in the 1990s. So far, I have found the following variations (not quite 40, sorry):

Aga Louts. These are people who have migrated to a small town or village having retired from their well-paid jobs in a city. They are often lawyers, planners, architects, and the like. After a month they are bored, so they decide to ‘give something back’. They may join the Parish Council or form an Action Group. Watch out. These are articulate, well-educated people and they know the system. And they have time one their hands.

CAVE. These are Citizens Against Virtually Everything also known as BANANAS – Build absolutely Nothing Anywhere Near Anyone. They are anti-vaxxers, refusing even tests as they believe Bill Gates will shove a tracker up their nose. Bananas indeed. Avoid.

SOBBY. These appear like perfectly reasonable people as they are pro-development and see the need for more housing. Think Campaign for the Protection of Rural England (CPRE). The Hampshire branch is all for new homes, but not in Hampshire; try Surrey. But the Surrey branch says: try Hampshire. In other words, ‘Some Other Buggers’ Back Yard’.

NIMTOO. This is the most dangerous of the species and it is confined totally to politicians. Not In My Term Of Office, a feeling that many councillors will be having this morning. A great example is ‘Carbon Neutral by 2050’, by which time Mr Johnson will be 86 and well out of Downing Street if not then, maybe next week.