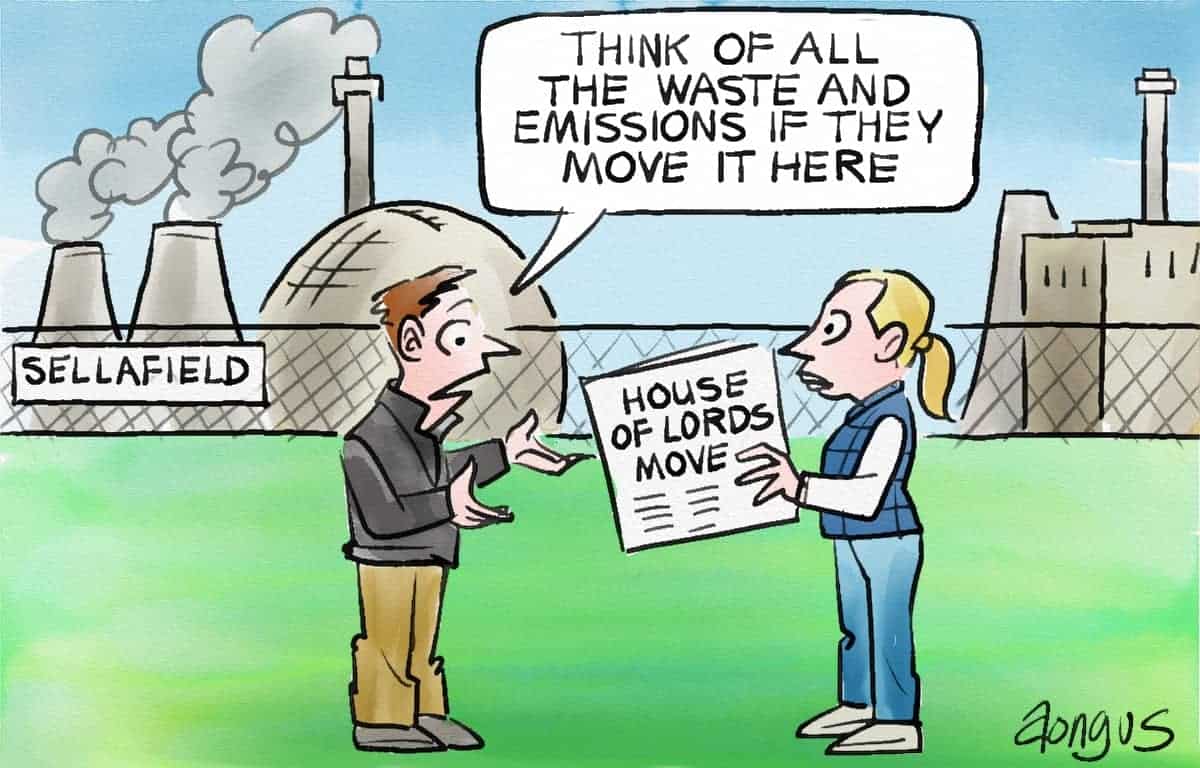 In a previous incarnation, I wrote about what an excellent idea it would be to move Parliament out of London because the Palace needed to be rebuilt. That was about five years ago.

So, I was absolutely delighted when Mr Gove announced that he was planning to do just that with the House of Lords. I recognise genius when I see it.

But where? That is the question.

When the government decided in the 1950s that nuclearpower was the way to generate the country’s electricity they decided that they should move the plants as far away as possible from London.

So the first plant was opened at Windscale by Her Majesty (good health Ma’am) in 1956. ‘Where?’, I hear the young ones shout. It’s now called Sellafield (why not sell the lot) where I spent many a day when I worked in the industry.

There is no fast way to get to West Cumbria– it’s six hours by car, train or air (there is no working airfield). This is one of the most deprived areas in the country where the only industry is nuclear. The locals tell a dark joke: What would you prefer: to win Euro-millions or a job at Sellafield? Most people need to think about it.

But what an economic boost it would be. As well the Lords and Ladies, there would be the attendant trail of hangers-on fanning out behind them like a comet’s tail: civil servants who would be delighted to work from home (houses are big and cheap), lobbyists (count me in), caterers (at least two Michelin-starred restaurants), flunkies of assorted types, secretarial support, the list goes on.

And by a happy co-incidence, the huge reprocessing plant is about to shut so the House of Lords will be assured of a warm welcome when they hold their debates there. Glowing reports are expected.

Naturally the noble Lords and Lordesses are not happy. Lord Cormack (83), a Grimsby lad, referred to Mr Gove as ‘an intellectual flibbertigibbet?’

PS. Although I have written this with tongue slightly in cheek, the reality is that without living in – not visiting – some of the country’s most deprived area, the Levelling Up agenda is just a slogan