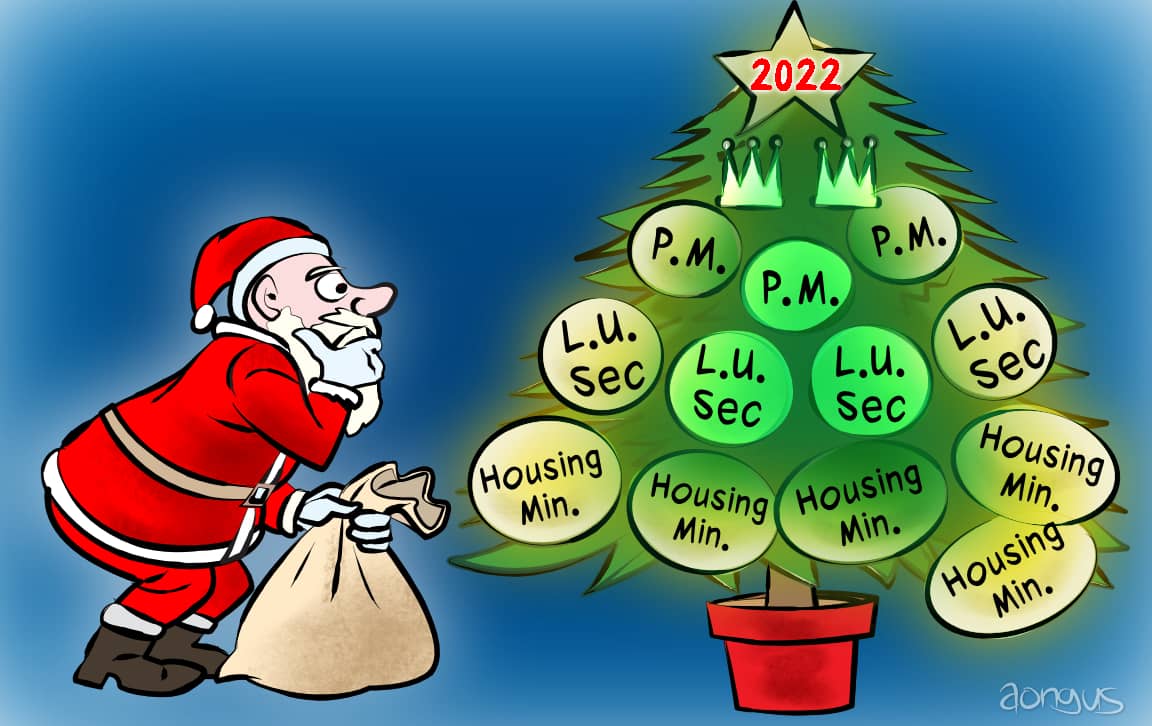 Come on boys and girls! All together now… Five housing ministers, four Levelling Up Secretaries, three Prime Ministers, two Monarchs and all we want is one planning consent!

I think we can all safely say it has been one of the most turbulent years in peacetime we have ever had in the history of our great country. The phrase “you couldn’t make it up” never rung truer.

So, let’s reflect on the year…

On 6 February Her late Majesty passed the 70-year anniversary of her accession to the throne. The world was still reeling from the Covid pandemic and there was a collective sigh of relief that we were at last returning to normality.

Then in April in Boris and Rishi got fined for breaking their own Lockdown rules (13 April), “Tractorgate” broke at the end of April and triggered a a by-election.

Boris survived a confidence vote on 6 June comfortably… but by the end of the month the Tractorgate by-election was lost and then Chris “Pincher by name pincher by nature” (to quote Boris) broke and we saw one of most dramatic series of resignations by ministers anyone ever witnessed (57 in total).

Poor dear Boris fell on his sword after uttering the phrase “Et tu, Rishi?” on 7 July.

This in turn triggered a Leadership campaign so dramatic it displaced reality TV with Liz and Rishi taking clumps out of one another live on TV. Truly cringeworthy.

Then on 5 September Liz won the Leadership and shook hands with the Queen at Balmoral.

On 8 September our beloved Monarch of 7 decades passed away and our nation and the world mourned the loss of our collective grandmother. We have a new King Charles III and Queen Camilla and we all have to get used to calling QCs KCs and remember to sing God save the KING.

The 45 turbulent days of Liz Truss as Prime Minister… now there we really broke records…from the shortest Prime Minister in office EVER to shortest tenure as Home Secretary (Grant Shapps who served a week).

Then poor dear Liz was unceremoniously sacked after her Trussonomics proved to be a bit of a disaster. I will never forget the day when she announced a new housing policy from the dispatch box during PMQs! (It was like a live West Wing episode with policy being made up on the hoof). *

100 backbenchers derailed the Levelling Up and Regeneration Bill and stripped out housing targets thereby seriously damaging the prospects of housing delivery for the next year and a half (Here is a hot tip for you, save the date 2 May 2024).

All this instability had a huge impact on our industry.

Let’s all hope 2023 will be quiet and peaceful.

Have a wonderful and happy festive season whatever you do.

Ps. Did I miss Larry the Cat being PM?