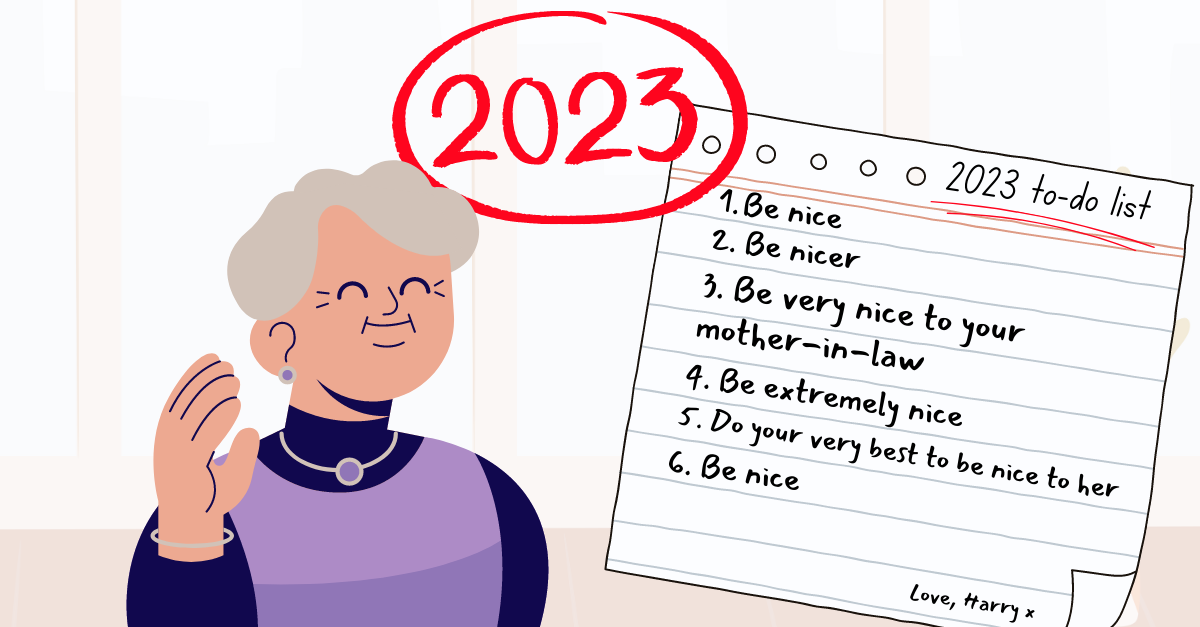 We all make them, don’t we? I’m going to join the gym this year and lose the “Christmas padding” or I’m going to stay on top of my admin…

I had a chat with a friend over Christmas and the conversation turned to New Year’s resolutions (after we had dissected the King’s speech). He surprised me by saying he is going to be “nicer to his mother-in-law”. I was somewhat taken aback by this, as I’d had him down as the model son-in-law who is very attentive in his duties (more so than I am).

Turns out he is a bit short with dear old mother who, after being widowed not so long ago has become quite reliant on him for everyday tasks… she called him over to her house on pain of death because her car was making a funny noise. He explained that he was rather tied up and couldn’t do the 75 mile round trip but if she started the car and they do a WhatsApp video call he could listen and tell her.

This they then promptly did.

He was none the wiser but mummy insisted that he should use all of his manly skills to diagnose what is the matter with the X-Reg Fiesta. Out of desperation, he said, maybe there is a hole in the exhaust. Take it to Kwikfit.

Mother then duly took the car to Kwikfit where they carefully examined it and found no hole in the exhaust… she then reported this back to him and accused him of being rather useless. He pointed out that there is definitely a hole in the exhaust… at the back… the clue is in the name… exhaust!

But this got me thinking – maybe we should all be a bit nicer – nicer to the planning officers who are under-staffed and over-worked, nicer to the numerous councillors who are facing electoral defeat in May (especially the poor Tories), nicer about the government and nicer to the NIMBYs (ok, maybe I’m going too far now).

But, in particular, we need to be nicer to the communities where we want to promote development. It’s not difficult to do something nice. We recently ran a competition for schools to design a logo for an aspect of a development and the winning school got £500 towards sports equipment.

This got the children, parents, guardians and teachers involved in the democratic process. A group that is usually too busy with life to get involved in having a say about future housing. This turned them into YIMBYs by engaging them and giving them a voice.

So, let’s toast to that with a nice soft drink in dry January! (Only joking! we have to be nice to the poor brewers too).

Ps. The Government is running a consultation on the Levelling Up and Regeneration Bill and in particular about the housing targets. I would urge you to respond… and get mummy-in-law to respond too!