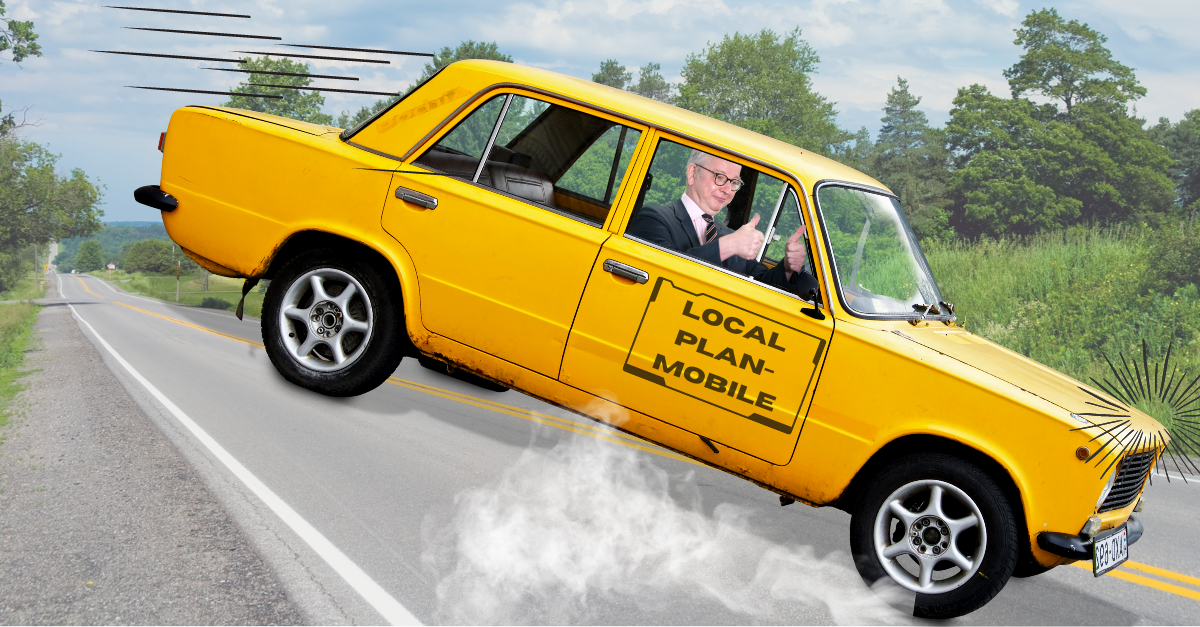 There are now over 30 councils that announced delays to their Local Plans for a variety of reasons: a big one being Govey and Rishi caving in to the troublesome backbenchers over the Levelling Up and Regeneration Bill at the tail end of last year. This has brought about a marked increase in Local Authorities stopping their Plans dead in their tracks to ‘wait’.

These councils include South Staffordshire (praised by their MP, Sir Gavin Williamson – yes, I know, I had the same question – what does his pet Tarantula, Cronus think about this?), Mole Valley in Surrey (LibDem), Horsham in Sussex(Tory), Stockport in Manchester (LibDem), Teignbridge in Devon (LibDem), Vale of White Horse and South Oxfordshire (both LibDem with a joint plan), North Somerset (Ind, Lab, LibDem, Grn), and Gelding in Notts (Labour) among others.

And I can guarantee you there will be more Councils who will do the same. There will also be a correlation between councils who slam on the brakes and those who have elections in May.

The dear old Government is conducting a hefty consultation on the proposed amendments to the Bill that started on 22 December and will end on 2 March. (If you haven’t submitted your response yet, I really do urge you to do so!). Then, the clever people at DLUHC will analyse the responses, run a few focus groups, and produce expert reports for the edification of other great experts. So, we are looking at months, if not the best part of a year, before the findings are known and the Bill can progress on its slow, tortuous progress through Parliament.

By which time we’ll reach May 2024 (remember that date) and it all might become academic.

Or to quote Matthew Pennycook (shadow Housing Minister for those of you who don’t know… do make a note of his name…) “The impact of Rishi Sunak and Michael Gove’s reckless decision to signal the end of enforceable housebuilding targets without a viable alternative is already being felt across the country…. Their weakness in the face of backbench pressure will mean fewer homes built, a deepened housing crisis and a further blow to our economy.”

I fear Matthew Pennycook is right. Look at the evidence.

But quite apart from that, until this blasted Levelling Up and Regen Bill gets a signature that says “Charles R”, it is not a law… It means that the housing targets and requirement for a five-year housing supply remains in place. As does all the reasons to appeal planning decisions that are rejected by Local Authorities.

So, my message to any Councillors reading this is simple, do you really want to abdicate your powers to control development in your area?

To the rest of you, don’t get too despondent… It is business as usual. We are still playing the game by the old rules.